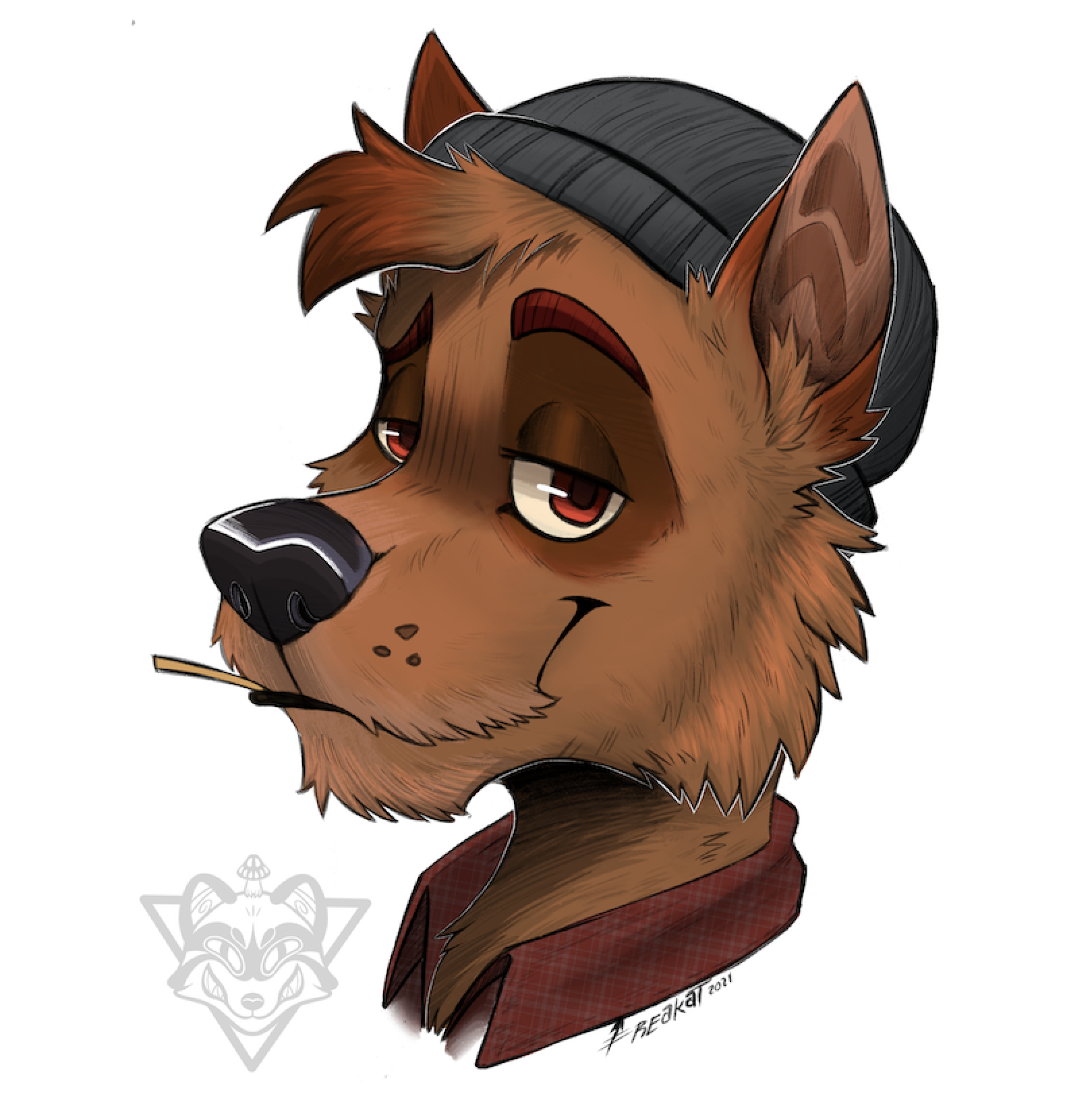 Buntline is an indeterminate sort of terrier mutt, always smiling and outgoing, who works as a deckhand on a sailing ship. Not a shiver-me-timbers Victorian- romantic pirate ship, though, but a modern-day sail-training brig run by a youth-development charity, taking young people to sea for character-building voyages. 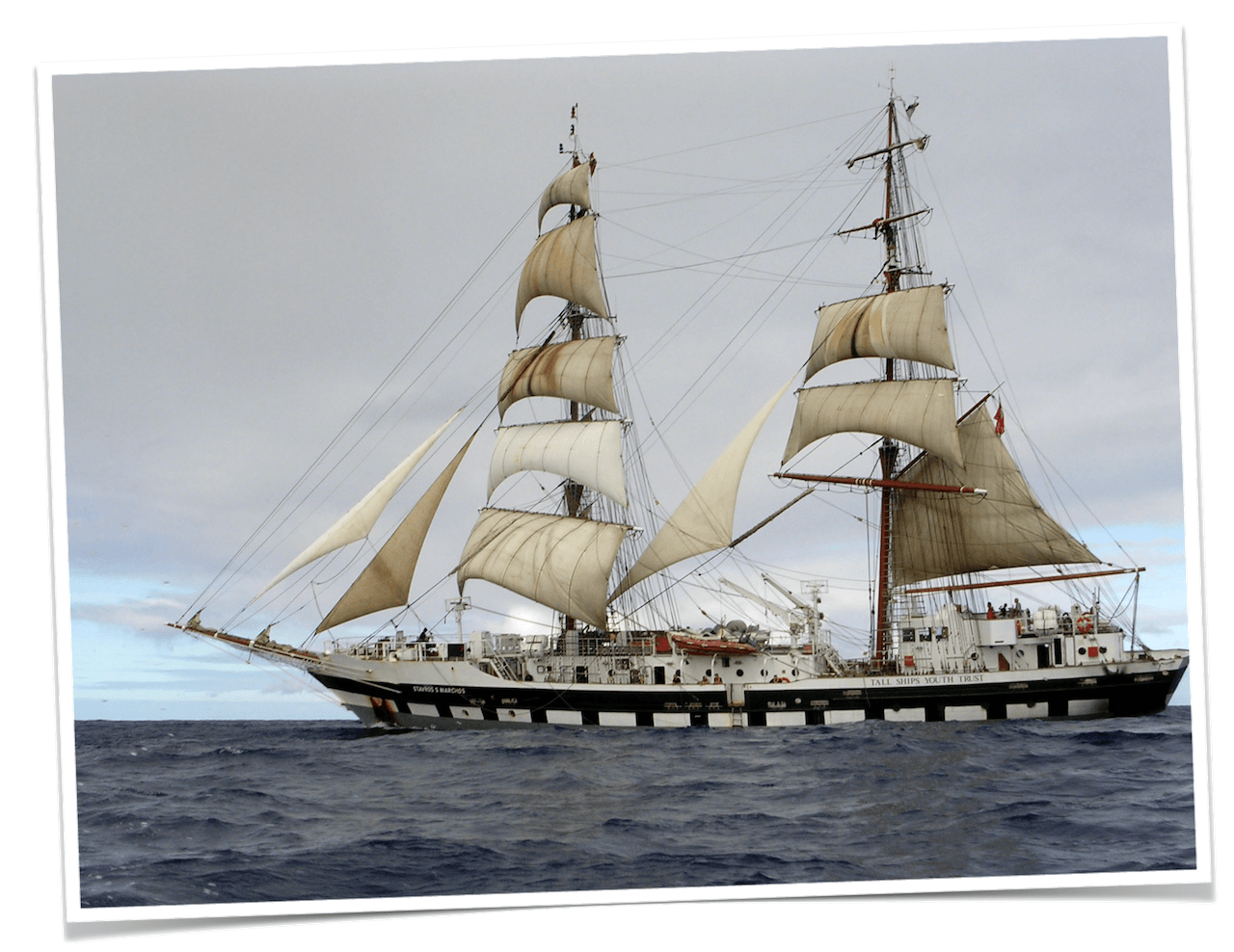 Most of the crew - teenage voyage crew and part-time adult volunteers - change over every two or three weeks, but Buntline is one of the half-dozen core people who live and work full-time on the ship, wandering around the globe wherever Head Office sends them. Ireland last week, Portugal tomorrow, Canada next month - it doesn't much matter to him.

As a deckhand, Buntline works for the Bosun to maintain and repair all the gear above decks, which mostly means the rig from which the ship’s eighteen sails are set and all the miles of wire, rope, blocks, lashings, and everything else up there that makes it all work. Somehow this usually seems to involve grease, tar, tallow, paint, or some other messy substance. Emptying the bins falls to the deckhands too - the one bit of the job he doesn’t much care for.

A buntline, incidentally, is one of those many lines, used to set and stow the square sails. It’s pronounced “buntlin” to rhyme with “tin”, and is of course where Buntline the dog gets his name.

The other big part of Buntline’s job besides maintaining the gear is helping to teach each new batch of trainees how to work it - starting on the first day with coaxing them gently up the mast, but they’ll very quickly find themselves out on the yards handling the sails like the pros.

Buntline really enjoys this side of his work - he’s irrepressibly cheerful whatever the conditions and never seen without a smile on his face. He’s friendly and outgoing, confident without being overbearing, and just always enthusiastic about whatever’s going on. If he has a fault it’s that given half a chance he’ll talk your ear off about ships and the sea - he's always got a bit of cord in his pocket to teach you a new knot if you ask him, or a mildly dirty mnemonic for COLREGS lights or day-shapes. And he can tell you all about the time they conducted a burial at sea for a busted toilet, or rescued a sinking ketch full of sea-scouts, or pelted the Bosun with empty bean tins by mistake.... When he does need some time to himself, Buntline will generally head for the fore crosstrees, to sit high above the ship and just watch the sea and the sky. 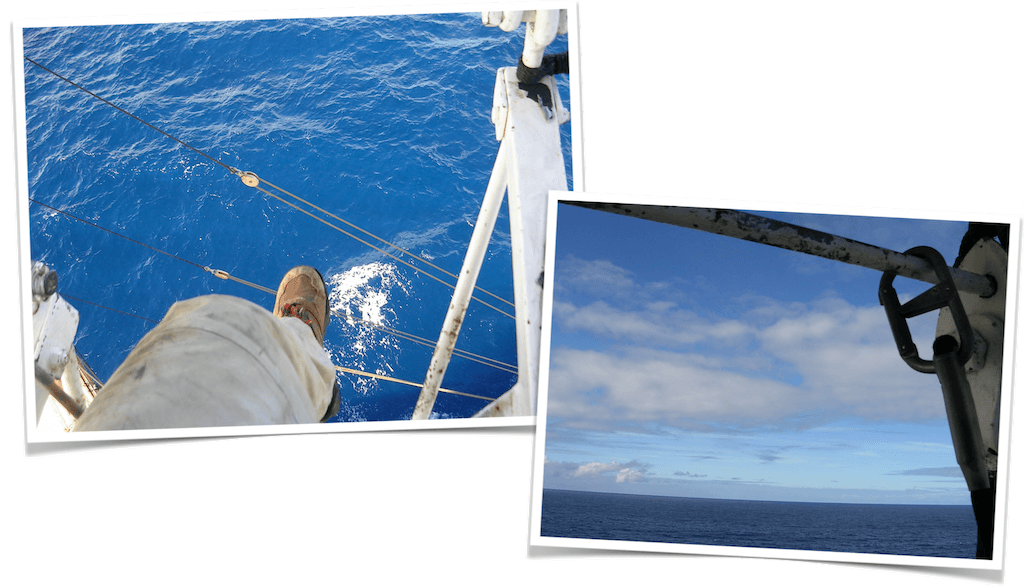 Precise fur colours and patterns on the body are not critical to Buntline's design, with the exception of the scar on his right inner thigh. It's more important that he have recognisably the same face - see the "Face Reference" image - and, depending on the scenario, a suitable combination of clothes. Even if he's not wearing anything else, Buntline is very rarely seen without his hat! 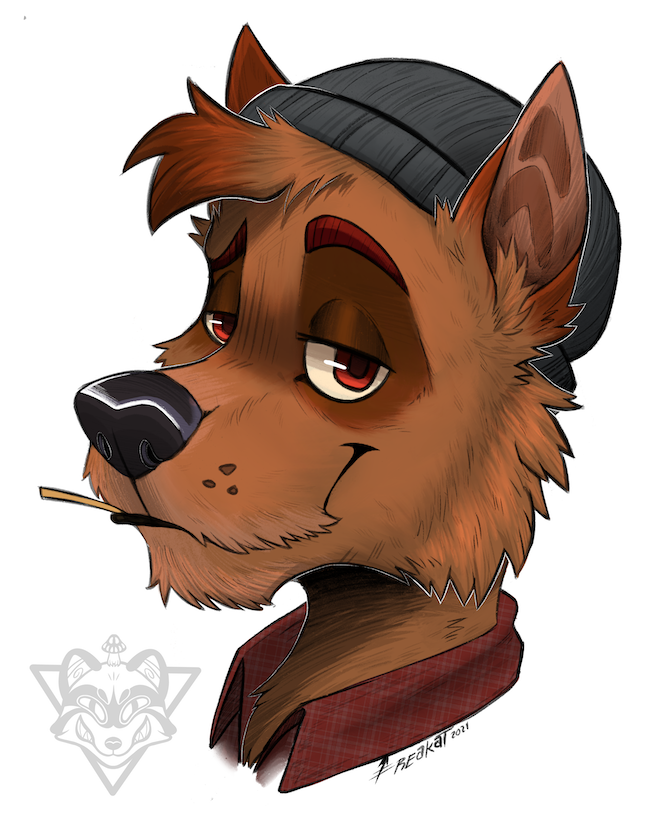 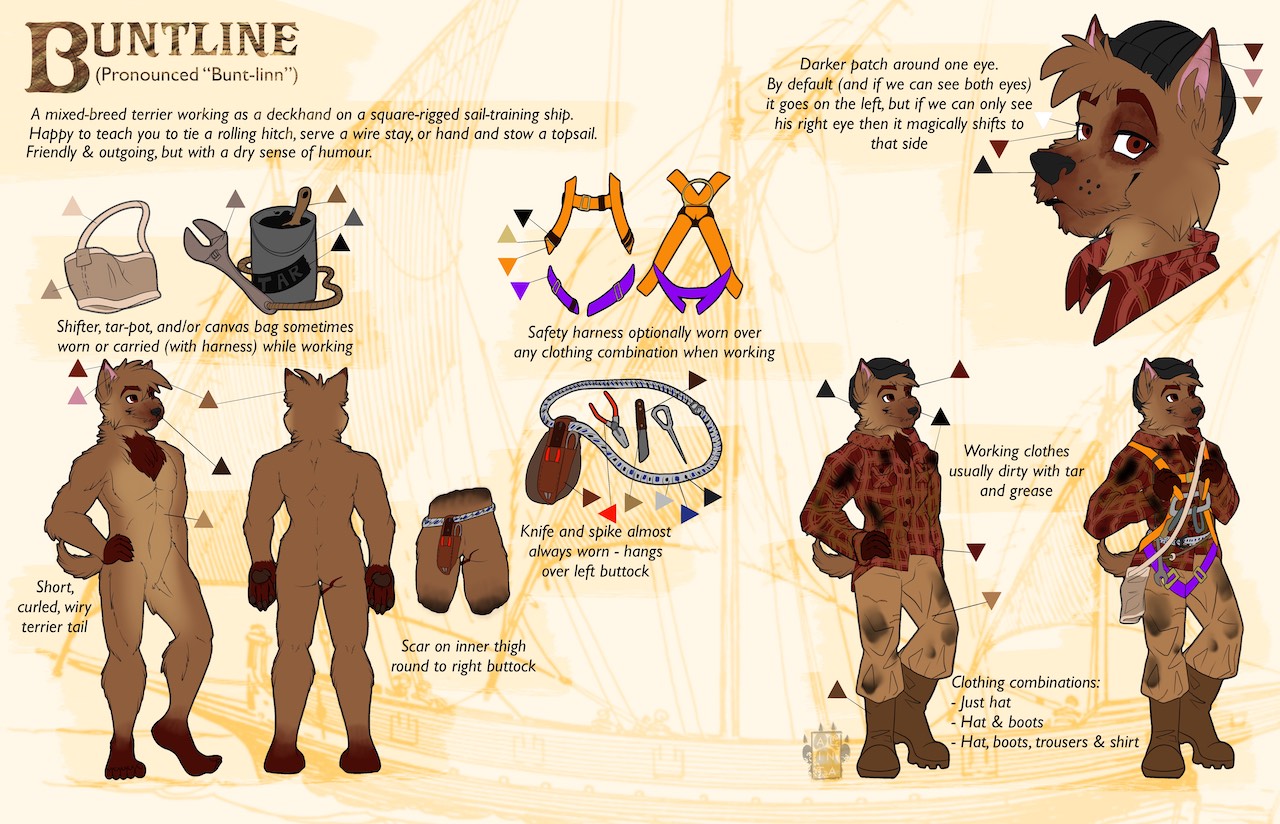 Buntline is no artist - all these pieces are commissions from others. Artist details under each picture.

The very first art ever drawn of Buntline 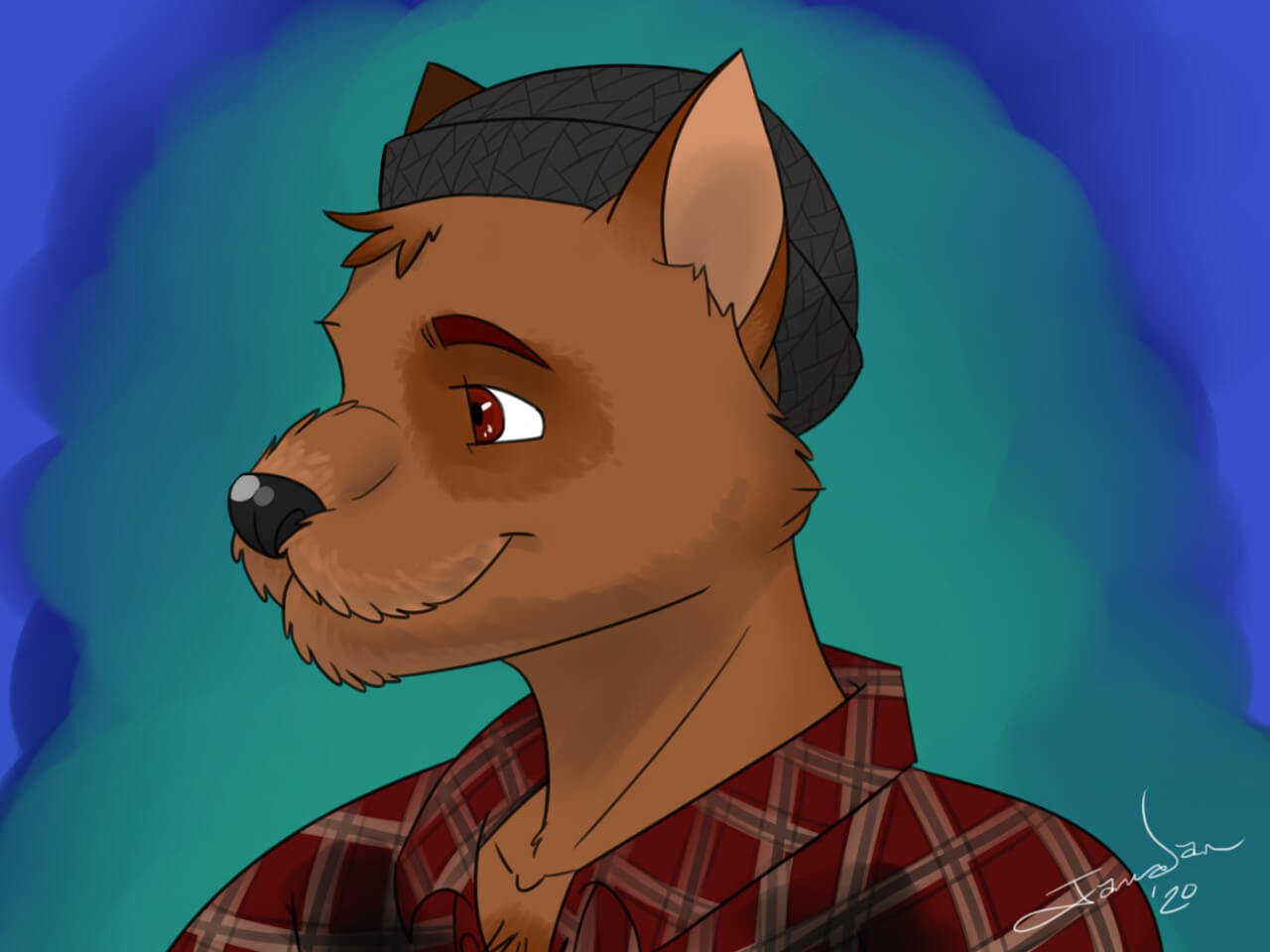 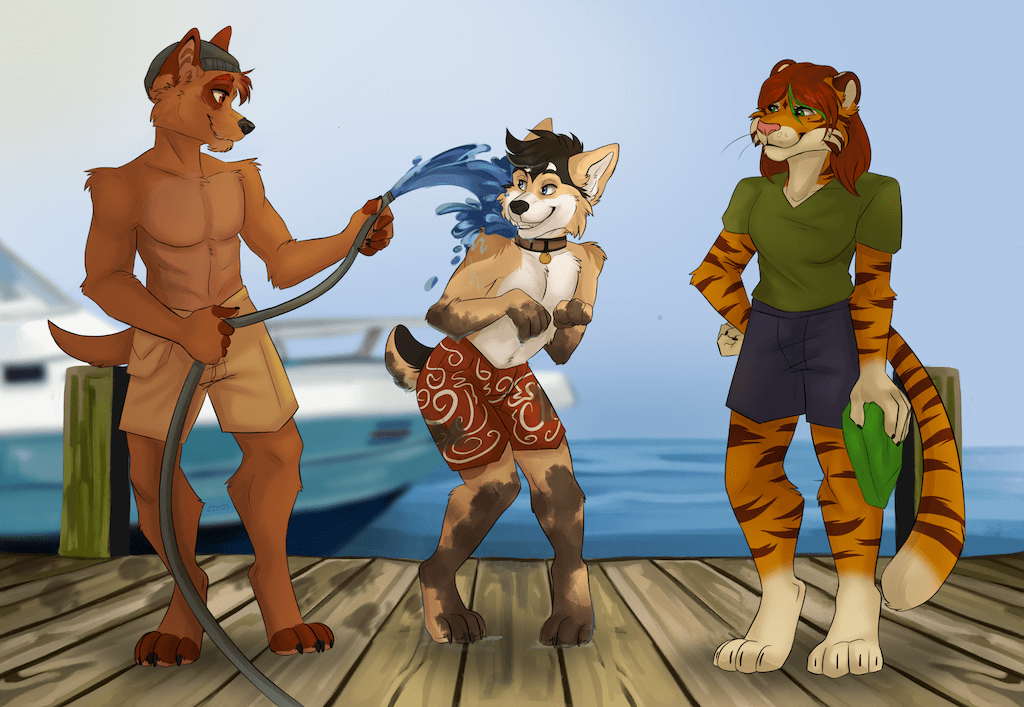 A quickie commission that became the definitive reference for who Buntline is. 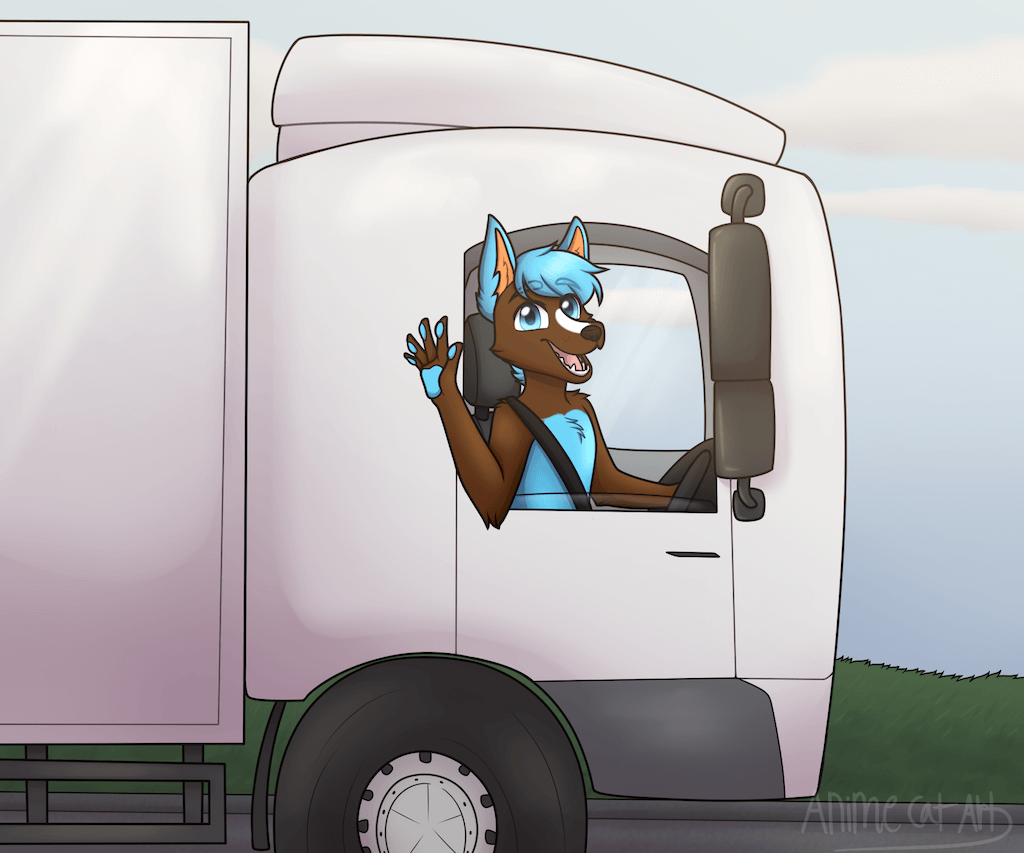